More about me here... 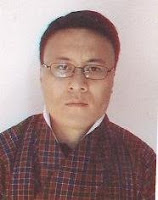 I was Born in 1977 to a simple family in the remote village of the eastern Bhutan. I am the sixth of the eleven children in the family. Like my grandfather, my father served as a courtier in the Ugencholing Palace in Bumthang. The Palace was built in 17th Century by Deb Tshokey Dorjee, one of the prominent ruler during that time and inherited by the successive descendants. After he retired in 1975, he settled in Kurtoe (Lhuntse) in the eastern Bhutan where I was born.

My mother married my father at the age of 14 and led a most challenging life of cradling 11 children. She died at the age of 52, when I was still studying in the college. When she died, it was six months after I last saw her. Seven years later in 2007, my father died due to advanced diabetics. While I could be of some help to my father as I was then employed, I have been a useless son to my mother. Neither I could support her financially nor lend a helping hand during her prolonged period of illness as I was writing my month long university exams and people at home did not inform me. Although they did it for good, it still remains one of my greatest regrets in life.

Well today, eleven of us, eleven siblings are on our own but unlike in many cases we are well coordinated and organised and go through happiness and sadness all in unison.

My two elder sisters live in native village and look after our ancestral home and property and others like myself visit them once a year together to perform our annual ritual and pay homage to our long gone parents.

Two of my younger brothers are proudly profound Buddhist disciples under a great saint, often described as a living Buddha, the Dodrupchhen Rinpoche, based in Sikkim, India.

Besides my works, I spent my free times writing down whatever thoughts that come to my mind in the form of simple verses. That is why I have created this blog. I hope the like minded readers will enjoy going through it. Please leave a comment if you do. Thanks a lot. You can also contact me at yontenp@gmail.com or www.facebook.com/yontenp and it would be my honour to be your friend there.